Groundbreaking research related to equine nutrition began with the premise that bacterial diversity would not differ dramatically between dry hay and hay soaked in water or steamed at high temperatures. 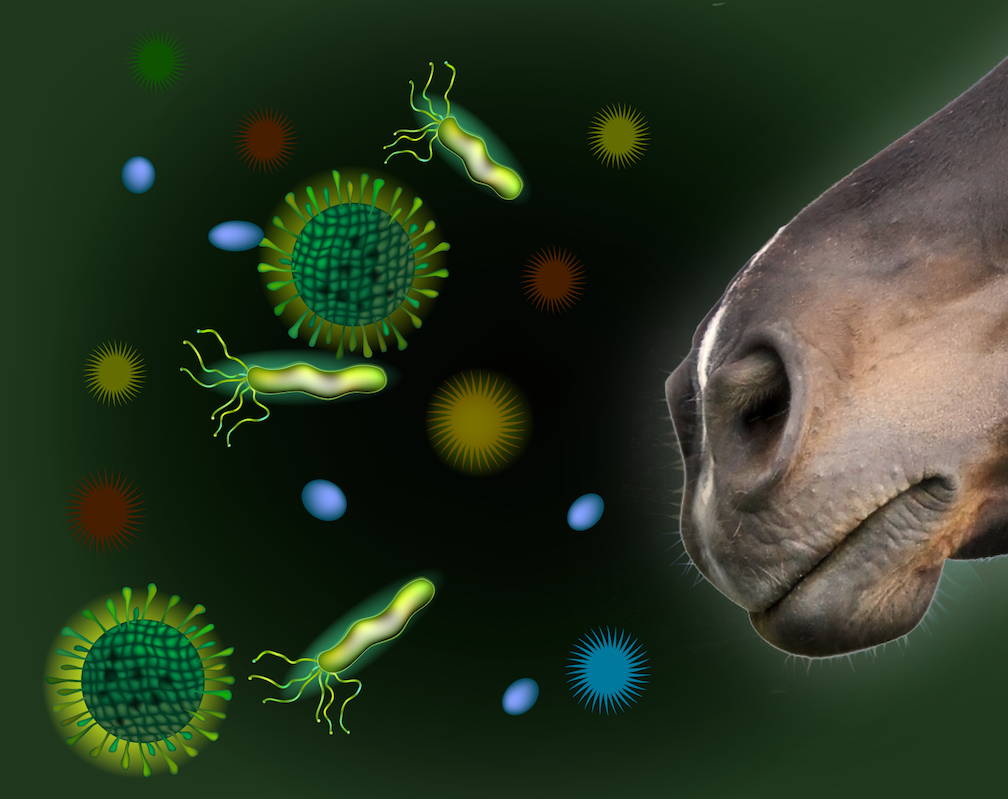 Researchers at the Royal Agricultural University in Cirencester, U.K., were wrong about that. It turns out the hay "biome" is affected differently by soaking and steaming, significantly more so than by hay type or where the hay came from. In the course of disproving one of the study's hypothesis, however, much was learned about the treatments' effect on the "good" and "bad" bacteria that constitute the hay biome.

Titled "The Hay Biome: Characterising the viable bacterial community profile of four different hays for horses following different pre-feeding regimens," the study was published this past November on PLoS ONE, the peer-reviewed scientific journal. It's the first study to look at the quantity and characteristics of bacteria in hay subjected to different pre-feeding treatments.

"Hay and the soil it's grown in are organic matter, so it's going to have some bacteria in it," explains Dr. Simon Daniels, a senior lecturer at the RAU and a member of the three-researcher team who designed and executed the study. "But we didn't know what those bacteria would be, whether they'd be viable and how they'd be affected by soaking or steaming." Most of the bacteria found in dry hay are non-pathogenic, he adds. The majority were plant or soil-based and/or those already found in the equine digestive system.

To compare the two pre-feeding treatments' effect on bacteria, four types of hay sourced from two locations in England were used: two mixed meadow grass hays and two of Italian rye grass, a monoculture. Samples were treated by either a 12-hour soak in tap water or one cycle in a Haygain High Temperature HG 600 steamer. The latter method injects steam at temperatures up to at least 100°C throughout hay in a thermally sealed chest.

Steaming proved most effective in reducing the overall bacteria populations in hay and it maintained the diversity of bacteria naturally found in dry hay. Steaming also reduced the bacteria associated with infectious respiratory disease and dental problems. "The dental issue is quite novel," says Dr. Daniels of a possible topic for further study. Additionally, steaming was found to preserve bacteria associated with the process of digesting forage. Steaming "denatured" the proteins of several types of bacteria, rendering them harmless in the horse's digestive system.

Prior to this study, this RAU team's work had clearly established that steaming reduced a substantial amount of problematic particles found in all hay. These include bacteria, fungi and yeast. "We didn't know exactly what was left, and whether remaining bacteria were viable or not," Dr. Daniels explains. "We've now found that most of the bacteria that do survive are not harmful. That was more luck than anything else."

Conversely, soaking was found to reduce the diversity of the bacteria profile in hay, largely because some bacteria thrive in water. Horses are used to eating forage with a diverse bacterial population so reducing the diversity is not necessarily a good thing. Soaking also increases undesirable and potentially harmful bacteria.

One example of these "bad" bacteria are "Gram-negative" bacteria. Most of these carry lipopolysaccharides, aka "endotoxins," that are potentially harmful if ingested. "It's amazing the bacteria that can be picked up in hay," Dr. Simon comments. "Once pathogens get into the body, they pose a potential threat to health." One specific Gram-negative, the proteobacteria, are common in water sources, so the scientists were not surprised to see them in soaked hay.

The study also detected in soaked hay pathogens found in infectious respiratory diseases. There is not yet a proven causal link between the two, Dr. Daniel clarifies, but a connection stands to reason.

Soil, hay and the equine gut are naturally loaded with bacteria. They flourish or fail in different environments and have impacts that range from harmless to dangerous. While there is much to be learned about their impact, this advance in understanding the effects of pre-feeding hay treatments leads to a simple conclusion for horse owners.

"Collectively, these findings add to a body of evidence that suggests high temperature steaming is the most suitable pre-feeding treatment for equine health," explains Dr. Daniels, a horse owner himself. That's true, too, for horses who need forage with low water soluble carbohydrates but don't have access to it. Steaming does reduce WSCs to varying degrees, but when a dramatic decrease is needed, soaking leeches this nutrient more effectively, along with the many beneficial nutrients in hay.

"If you need to long-soak your hay because your horse is obese or prone to laminitis, then it's sensible to pop the hay in the steamer afterwards," Dr. Daniels concludes.

Dr. Daniels conducted the study with Dr. Meriel Moore-Colyer, a Professor and Graduate Dean at the Royal Agricultural University, and RAU student Jacob Hepworth. The study was funded by Haygain, Ltd., which has a long-standing partnership with the RAU. As is typical with university research, funding does not influence findings. "We were left to design and run the study as an independent organization," Dr. Daniels explains. "There was no influence on how we did the study or the results."