Show pony steams back to health with young horsewoman's help. 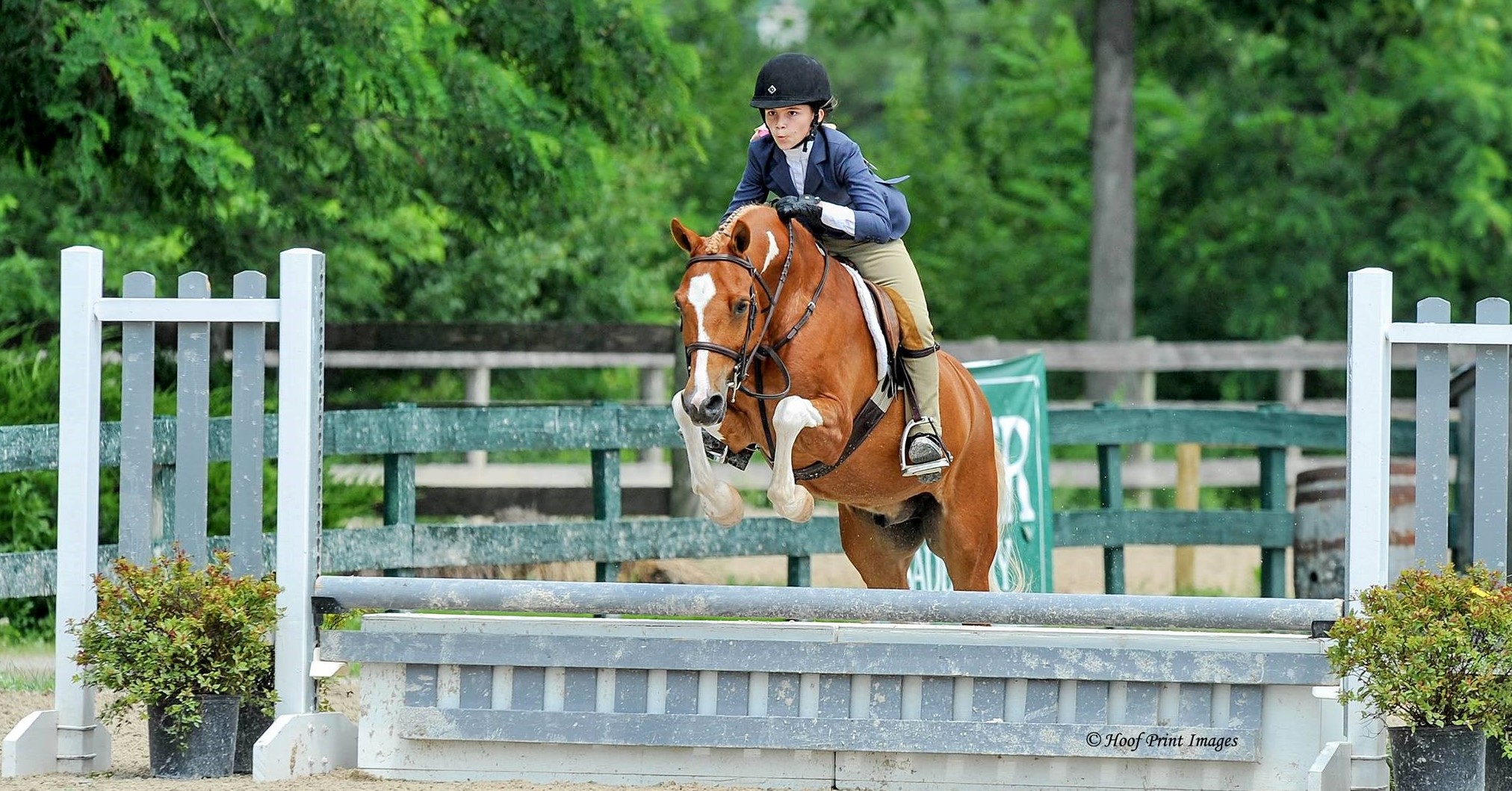 The mention of Marguerite Henry's Misty of Chincoteague novels beams many equestrians back to their childhood dreams. As the protagonists of the 1950s tales, these hearty, feral ponies roamed Virginia and Maryland's Assateague Island before going onto adventures with adoring young owners on the mainland.

For the now 17-year-old Ella Doerr, that story is fact, not fiction. At 7, she went looking for a safe, sane starter pony. Instead, she found then 5-year-old "Whinny," a 13.1 hand chestnut Paint with four long, white socks. The Chincoteague's charm was irresistible. "He was lying down in his stall and he looked up and blinked at me with those magical eyes," Ella remembers. "I fell in love instantly."

He was as green as they come, as was Ella.

Fast forward six years, to 2016, when they excelled at the Pennsylvania National Horse Show at Harrisburg in the Medium Children's Hunter division, winning the class and finishing 6th in the Classic. An 86 score in one of the country's biggest Indoor circuit showcases is an indelible highlight of a year that included Grand Championships on three regional circuits.

"We all hear that a green pony and green kid don't mix," Ella says. "But we did."

Harrisburg four years ago was the finale of their show career. Ella has gone onto impressive accomplishments in and out of the saddle, and Whinny has introduced younger riders to the sport. 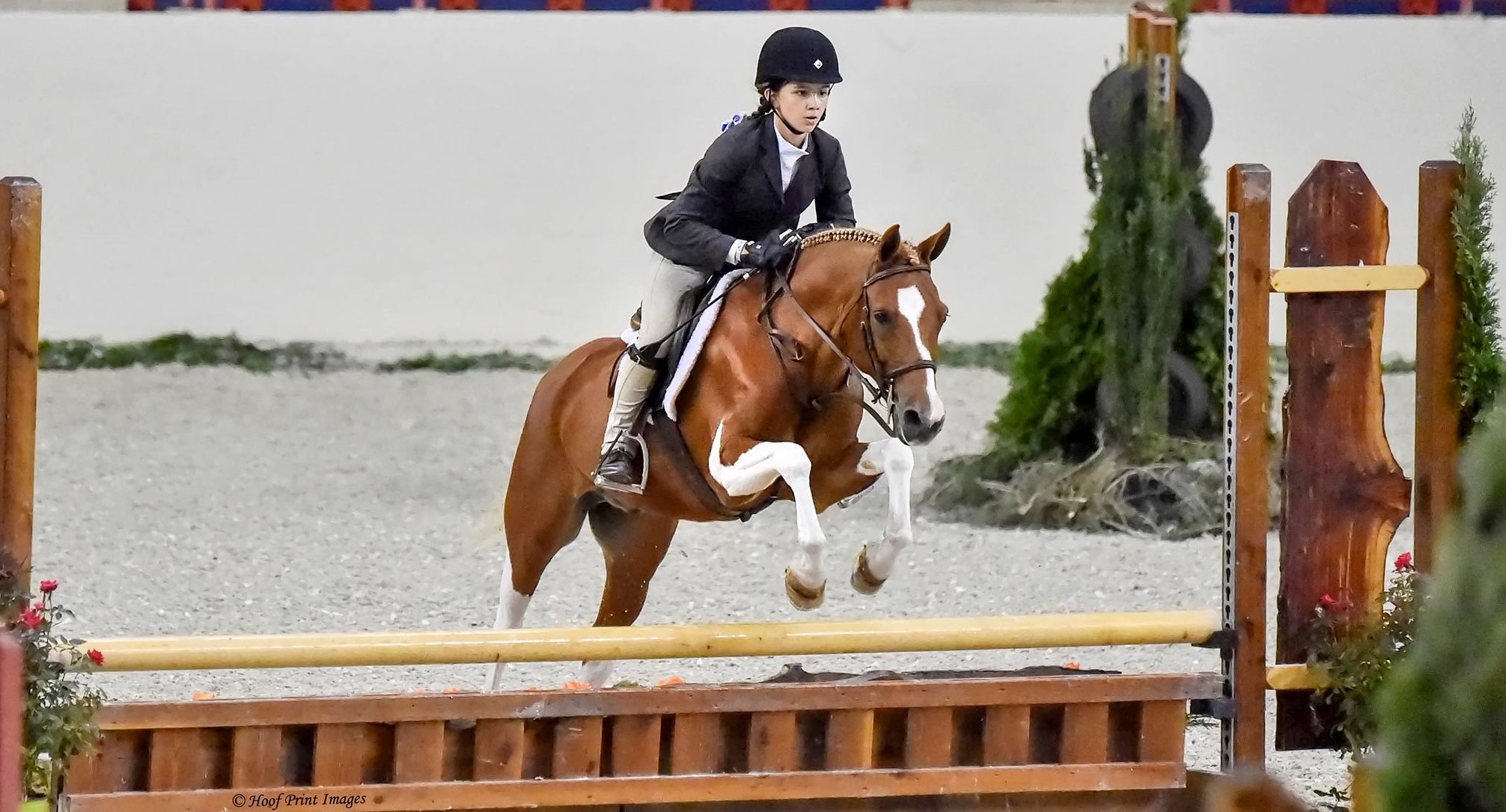 Like all good stories, Ella and Whinny's had an obstacle to overcome: a cough that went from so occasional as to be dismissed to debilitatingly persistent. It progressed over a two-year period. For the last few years, Ella has limited the otherwise healthy pony to training and competition levels that require only minimal exertion.

The first summer after he retired from higher level competition was tough. Home at her family's small barn in Wellesville, PA, Whinny had major allergy flare-ups, followed by a throat infection. Multiple vet visits could not determine if the two conditions were related. They did establish that Whinny is badly allergic to alfalfa hay, pine trees, insect bites and other irritants that are hard to avoid in the barn environment.

"We tried everything," recounts Ella. "Homeopathic allergy treatments, cough syrup and inhalers. We got him to the point where he was okay except that he still coughed when he was ridden." Ella tried soaking his hay. This common DIY method for removing dust can drastically increase bacteria and, like a lot of horses, Whinny didn't like it. "He looked at me like, 'Really? I have to eat that?'" Ella relays. "It broke my heart."

Ella is a remarkable and savvy horse woman. She is the USEF's reserve champion USEF Sportsmanship Award winner in 2020; the USHJA's Youth Sportsmanship Award recipient in 2016; a consistent top finisher in the USHJA's Horsemanship Quiz national standings and a junior reporter for The Chronicle of The Horse. Ella's most recent report for the esteemed media outlet was an update on arriving at the Kentucky Horse Park for the USEF Pony Finals. Unfortunately, the next day, Saturday August 1, Ella had to break the news that they'd been cancelled due to corona virus cases at the venue. (She did circle back to the venue the following week with her current ride, Batman, to win their over fences class and ride to reserve in the Classic. Then she jumped into helping promote the Virtual Pony Finals as a fundraiser for a fellow pony rider, Alexis Halbert, who suffered a bad fall.)

Ella knew there had to be a better way to help Whinny, whose show name is Wind In The Willows. She found it in Haygain Steamed Hay. "I was so excited," she says of learning that high-temperature hay steaming rids hay of up to 99% of the inhalable bits of dust, mould, fungi, bacteria and allergens found even in hay that is considered high quality for its nutrient content.

Whinny and his stablemates expressed their enthusiasm when Ella's new HG One portable hay steamer began emitting the tantalising smell of steamed hay. But Ella was patient. "I didn't think we would notice a difference right away, but we did almost immediately. Within two weeks of getting steamed hay, Whinny doesn't really have a cough anymore. He's much better and healthier. And, happier because he doesn't have to have the soaked, sticky hay. He couldn't be more excited."