A cut above the rest - the difference between hay and haylage

As grass growth is seasonal, and our horses’ needs are not, we need to have a way of preserving grass to ensure a constant year-round supply. Equine Nutritionist Briony Witherow gives us a detailed insight into the differences between hay and haylage.

There are two main methods of forage conservation: controlled fermentation where the pH is reduced to a level where growth of bacteria ceases, or dehydration, where moisture content is decreased to reduce microbial activity.

Hay is an example of forage that is conserved using dehydration – the main challenge with preserving forage in this way being that it requires a longer period of dry weather to produce, whereas haylage is an example of grass preserved using controlled fermentation (and so is silage).

As a rule, when considering the digestibility of a forage, the more mature a grass becomes, the higher the potential yield, but the lower the digestibility (as it has higher levels of lignin). While very young grass in a growing state is much more digestible, if hay or haylage were to be harvested at this point, yields would be very low. There is however a point in between these two stages where a balance can be struck between digestibility and yield.

So, what lies behind the differences?

As mentioned previously, while both are preserved grass products, they are persevered using different methods. Subsequently, hay being preserved through dehydration has a much higher dry matter (lower moisture content) at over 80%, compared to a typical haylage with a dry matter of between 40 and 60%.

Many of the differences between hay and haylage are down to the conservation process. These forages are also typically cut at different times. Hay tends to be harvested between the end of May and end of July, cutting dates for more natural swards likely to be later still. While haylage on the other hand tends to be cut earlier in the season (generally before mid-June). It is essential with haylage that there is enough moisture content in order to facilitate complete fermentation, making later (more lignified) cuts difficult.

For both types of forage, harvest time will also ultimately depend on the location (altitude, aspect, climate), those at higher altitudes being cut later than crops grown at lower levels.

It is common to see forage advertised described by ‘the cut’ – early or late, first or second – and being able to understand the potential implications of this is essential when making buying decisions.

The first or second (or even third) cut refers to whether it is the first crop taken or a subsequent cut from a particular field. This tends to refer to more intensively grown grass crops which are cut once (usually very early in May), then left for 30-45 days and what is regrown is then cut again (July time).

The key message here is that it is the maturity of the grass that is the most influential nutritional factor when selecting forage. As maturity of grass species can vary, the quality and actual nutritional value of ‘early cut’ hay for example, would very much depend upon the knowledge and understanding of the person making it.

While hay requires a minimum curing period of 3 days (in optimum conditions, around 30 hours of sunshine), haylage only requires 1-2 days. The reality in the UK is that most hay is in the field curing for a week or more which carries with it risk of losses (respiration as well as physical leaching), the average number of suitable periods in Southern England being two to three opportunities per year – emphasising the difficulties we may encounter when trying to source high quality hay.

Hay is baled when it contains 65-80% dry matter in comparison to haylage at 45-50% dry matter, and the dry matter level when baled can also vary depending on the size and shape of the bales.

Once haylage is baled it needs to be wrapped within 4-6 hours to avoid unnecessary degradation. It is key that the seal achieved when wrapping is airtight (typically 6-8 layers of plastic) – if air can penetrate the bale, mould will be able to grow. The absence of air (anaerobic environment) is imperative to halt microbial activity.

The process where forage is preserved using fermentation is called ensiling. During this process lactic acid bacteria ferment water soluble carbohydrates (WSC) to organic acids under anaerobic conditions. During this process, the pH decreases from around 6 to around 4 which stops detrimental anaerobes, stabilising the product, and in doing so preserving the forage. As such, the WSC and moisture content are essential to the ensiling process, a lack of either potentially causing incomplete fermentation. The process is considered complete after around 3-6 weeks, where fermentation of WSC has ceased either due to a low pH or lack of sugars, at this stage the temperature drops to ambient temperature and the product is stable.

As hay is not wrapped, it should be stored in a dry well-ventilated area that allows bales to be kept off the ground. As haylage is wrapped or bagged, it can be stored outside.

While traditionally hay is left to cure for a few weeks before feeding, if moisture content allows (dry matter in excess of 86%), it can be fed straight off the field. In the UK, as conditions often may not allow for moisture content to be reduced sufficiently before baling, it is best to wait 4-6 weeks prior to feeding to ensure any residual microbial activity has ceased.

If hay is stored properly then it can be fed after several years, but it won't be as nutritious as it was when it was first made. It may also be dusty and if so should be soaked (10-20 minutes) or steamed before feeding. Poorly stored hay is often unsuitable to feed to horses.

Haylage needs to ferment, so it should not be fed straight after being baled and wrapped. The amount of time it takes to 'cure' is variable depending on the moisture and WSC content of the grass when it was wrapped, but a good guide is 6 weeks.

Sealing the haylage simply pauses microbiological activity so bales should always be checked for damage prior to opening and once opened must be used within 3-6 days (depending on the type of haylage and time of year).

It is worth noting that high temperature steaming can help to extend this ‘shelf-life’. 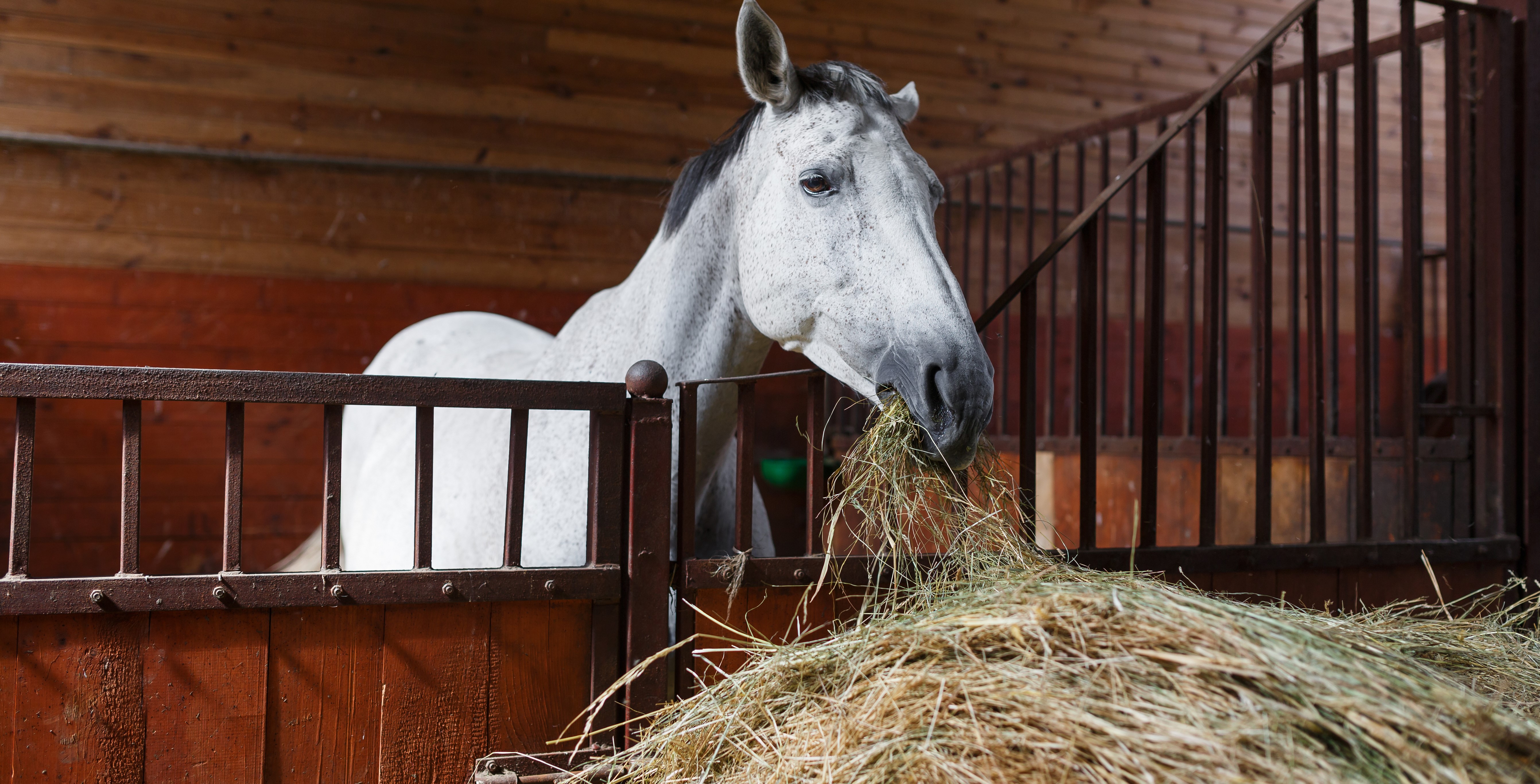 There are no hard and fast rules that can be applied when it comes to predicting the suitability of a hay as compared to a haylage. It cannot be generalised that hay is of lower nutritional value in comparison to haylage, nor can it be said that haylage is always lower in WSC as compared to hay. The reason for this, is that a huge variation in end product exists, due to various environmental factors. To name a few, nutrient levels within any forage crop (hay or haylage) vary depending on growth stage (maturity), time of day cut, grass species, soil fertility and light intensity. As such, even forage crops taken from the same field can vary if cut at different times of day. Equally, maturity of the crop plays a significant role - a late cut (more mature at point of harvest) haylage can be less digestible than an early cut hay. Ultimately this is why we often depend on forage analysis for more accurate guidance.

One of the most notable differences when comparing a hay and haylage product is the dry matter content, hay having a much higher dry matter than haylage. It is this high dry matter that brings with it most of the drawbacks associated with feeding hay. The high dry matter ultimately means this forage is higher in respirable particles such as dust and spores. Traditionally this is why haylage was chosen in preference over hays when feeding performance horses, due to the perceived superior hygiene.

The high dry matter of hay also brings one of its biggest advantages. With little moisture to dilute the nutrients it contains, hay can often be fed at reduced volumes in comparison to haylage, as so much of the added weight of haylage is simply water.

A haylage that is 50% moisture/dry matter, essentially has diluted nutrients, meaning that you would need to feed 1.5 times the weight of this haylage as compared to most hays. This may be in contrast to what many believe about haylage – the common perception being that haylage is ‘richer’ than hay and therefore needs to be fed in smaller quantities. While haylage certainly can be richer or more digestible than hay (being cut at a less mature stage), these nutrients are diluted. As such, in order to meet minimum fibre requirements, often more kilograms of haylage need to be fed as compared to hay.

Forage feeding in the 21st Century

With the lack of a sufficient weather window for production, hay is becoming a less attractive crop. This coupled with the comparative ease of making haylage may make getting hold of good quality hay in the future a challenge. There are now many specialist horse forage producers making hay and haylage solely for equine use – these producers often have a better understanding of what it is that we require for our horses and therefore may produce more suitable, consistent products.

The invention of steamers has afforded more flexibility in our feeding of hay in particular. With sometimes questionable quality, steaming allows these forages to be fed with much improved hygiene, where in some cases they may have been unsuitable to feed. The introduction of steaming could not have come at a better time considering the challenges we face with hay production.

Choice of forage should not only be based on which type of forage may be most suitable, but also what forage you can reliably source of good consistent quality.

As forage should comprise the majority of any horse’s diet, knowing a little more about where we are sourcing our forage from and what questions to ask from the provider is key in ensuring we make the best feeding decisions.

Lastly, once you’ve made your decision, always remember to properly transition you horse from one forage to another –even if it is just a different batch of hay or haylage. Changes in forage are reported to result in a greater risk of colic than changes in concentrate feed.

The Benefits of Steaming Hay

Leggatt, P., and Moore-Colyer, M.J.S (2013) The effect of steam treatment on the bacteria, yeast and mould concentrations in haylage for horses. Proceedings of the British Society of Animal Science. Nottingham UK, April 2013